In Chinese zodiac, 2022 is the year of the Tiger. In China, the Tiger is called the King of all Animals. You might ask, what does Tiger represent in Chinese culture? What unique meanings does the sign of Tiger embed?

inviteCHANGE Generative Wholeness Practitioner, Christine Gao, PCC details the history behind the Year of the Tiger.

From these Chinese (four character) idioms connected to Tiger, one can have a glimpse of the unique Totem worship that exists in Chinese ancient culture.

One can tell, especially from Crouching Tiger, Hidden Dragon, Tiger, and Dragon are the two most important Totem worships in ancient Chinese culture. Whereas dragon is associated with power, influence, nobleness, rank, and honor, the tiger represents courage, personal strength, willpower, competitiveness, and self-confidence.

There is a legend as to why the Tiger was included in the 12 Zodiac signs but not the lion.

It was believed that Jade Emperor, Yu Di, or the Ruler of the Heavens, summoned the animals to find a way to measure time, so he organized a race. The first twelve animals that crossed the river would earn a spot in the 12 zodiac signs in the order they arrived. The 12 animals included originally the lion but not the tiger.

The Chinese zodiac lion had a ferocious nature, he broke laws with other animals in the forest, destroyed villages, and made life uneasy for humans and animals. The Jade Emperor was very troubled about how to fix the chaotic situation of the forest. His ministers recommended the Guard Tiger of the Heavenly Palace.

The Tiger was a nobody at the beginning. Though powerful, he lacked hunting skills and was often laughed at by other animals. He was frustrated at times, but he never doubted his bravery and strength. He knew he had to learn what he was missing. It was believed that the Tiger learned most of the hunting skills from the cat except climbing trees, which the black cat had reserved as the last resort to escape from being hunted by the Tiger once the tiger became so powerful there was nothing to stop him. The Tiger was no longer brainless but cold and calm exerting his power and energy when needed.

The Tiger, with a strong belief in his own power, and an unwavering dedication to restore peace and justice in the forest and human world, was sent by Jade Emperor to earth. The Tiger beat the lion, bear, and pig and restored peace and order. The Jade Emperor acknowledged the Tiger’s victory by putting three horizontal and one vertical stroke in the Tiger’s forehead – 王, which is literally the Chinese character for King, he was titled the king of all the animals. This was the reason why till today, the Tiger has this character on his forehead!

The symbol of the tiger is found often in Chinese culture and that represents bravery, as in ancient literature, the warriors, and generals were using the metaphor of tigers.

The rising of the Tiger is a story of mental and moral strength. Which areas in your life are you inspired to claim more courage, strength, and boldness in the year of the Tiger? 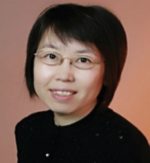 Christine is a Professional Certified Coach (PCC) with International Coaching Federation (ICF) and Director of Executive Coaching with Cornerstone International Group in China. A bi-lingual (Mandarin/English) Executive, Leadership & Team Coach, Christine is recognized for her in-depth knowledge and extensive experience of supporting senior leaders, leadership teams on enhancing leadership effectiveness, deep collaboration, embracing change and wellbeing of individuals and organizations as a whole. Christine is committed to providing executives and teams with the highest value, world-class Executive Coaching and team coaching services.
Read more about Christine »